Origin Jonagold was developed in 1943 at the New York State Agricultural Experiment Station in Geneva. Parentage Jonathan and Golden Delicious Nicknames Jonagold doesn’t have many nicknames, but it does  have other strains, including Nicobel, Jonagored, Jonica, and Red Jonagold. Appearance Jonagolds have a long stem and dry skin. The skin is usually tough and […]

Origin 1960, Minnesota Parentage Macoun and Honeygold Apple When We Harvest Mid-September Nicknames None Appearance Bright red color with a yellow blush Fun Fact The Honeycrisp apple is Minnesota’s state fruit! You can tell they are very proud of being the original developers of something so delicious.

Origin 1980 in Lovingston, Virginia Parentage Possibly Golden Delicious and Newtown Pippin apples When We Harvest September through October Nicknames None Appearance Greenish-gold skin that turns yellow when fully ripe, with flesh that is slow to oxidize Fun Fact The first ginger gold sapling started growing in the ruins of an orchard destroyed by Hurricane […]

Origin New Zealand, 1952 Parentage Unknown. Perhaps Lady Hamilton and a Granny Smith variety When We Harvest Late October Nicknames None Appearance Varies from orange to red over a yellow background Fun Fact Braeburn got its name from the orchard where it was first grown commercially: Braeburn Orchard. Don’t worry—it has nothing to do with […]

Origin Developed in Japan in the 1930s Parentage Ralls Janet and Red Delicious When We Harvest October Nicknames None Appearance Bi-colored, typically striped with yellow and red Fun Fact This apple is named after the highest mountain in Japan: Mt. Fuji. The name is appropriate, because Rowley’s Red Barn believes Fuji apples taste best when […]

Origin The Golden Delicious appeared in 1890s in West Virginia on the farm of Anderson Mullins. Mullins sold it to a nursery that put a cage around it—they didn’t want anyone stealing the scion wood to propagate their own Golden Delicious apples! Parentage Probably a Golden Reinette and Grimes Golden—it’s still a mystery! When We […] 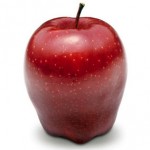 Origin The Red Delicious was found in 1870s in Iowa by a farmer named Jesse Hiatt. He chopped the unwanted seedling down twice before he finally let it grow! Parentage Unknown! It was discovered as a weird, mutant seedling When We Harvest September Nicknames Hawkeye, Stark Delicious, Delicious Hiatt Original, Delicious Standard, Original Delicious Appearance […]